Marianne started dancing at the age of 2. After training locally, with First Tower School of Dancing, Marianne left the Island at 13 to live and study at Elmhurst Ballet School. She later gained her degree from Laban Conservatoire for Movement & Dance (now Trinity Laban) and her teaching qualifications from The Royal Academy of Dancing.

After retiring from the world of professional dance with a troublesome knee injury Marianne trained at The Tisserand Institute in London gaining her diploma in Holistic Aromtherapy and becoming a member of IFPA and later adding Indian head massage and reflexology to her qualifications. At the same time as studying, she began working as an Agents Assistant at Waring & McKenna based in Mayfair.

In 2005 Marianne and her husband returned to Jersey due to family commitments. She is now a mother of 4 and after a very happy 2 years teaching at Jersey Academy of Dancing Marianne set up Momentum Dance with the philosophy of teaching dance to adults who want to find time for themselves and who may wish to reconnect with their dancing in a healthy and fun environment.

"I believe that you should do something you love, that makes you feel free and gives you the time to be you. You don't have to be amazing at it but it has to be for you and you alone. So find what it is you love to do and make it yours".

"Your Time, Your Dance"

Marianne is delighted to have become the first qualified and licensed DDMIX Instructor in Jersey and to be the first instructor to teach Darcey Bussell's DDMIX classes in Jersey.

Graduating as a Jazz Tap Dance Teacher in 2005 from the American Tap Dance Institute in Chicago, Christophe passed all 19 exams with flying colours and was the first British teacher to gain the teaching Diploma.  Under the guidance of master Tap Dancer Mr Chris Baker, Christophe learned not only the moves, but the history behind the moves, the individual sounds and the addictive rhythms that make Jazz Tap Dance what it is today.
Originally self taught and with a determination to ask every tap dancer he met to 'show me that step' Christophe soon became addicted to what was to become his favourite dance style and passion.  A late comer to dance, Christophe didn't attend his first tap class until he was 16 however a few months later he moved to the USA taking his dancing shoes with him, concentrating on his dance, musical and physical theatre skills training in high school.  After graduating he returned to the UK and worked in numerous professional dance jobs - working in the UK and across Europe, securing his membership with British Equity and gaining tons of experience before pursuing the teaching qualifications in Jazz tap dance.
Christophe is well known locally in Jersey and Guernsey as 'the man with the pink tap shoes' and for being involved in many professional shows, public performances, productions, cabarets, events, fashion shows and when he is not busy, he is off travelling around the globe as a judge for the worlds biggest amateur dance competition, the Dance World Cup.
Christophe is absolutely delighted to be joining the team at Momentum Dance and is looking forward to welcoming students old and new

Katrina is a local girl who started dancing at the age of 3 at First Tower School of Dancing. Throughout her time at First Tower she performed at the Opera House in various dancing school productions and also passed her dancing exams in Ballet, Modern and Tap up to the age of 16. She fell in love with dancing and performed at Caesars Palace in Jersey for two summer seasons to obtain her equity card and then went travelling to perform professionally in Portugal, Spain, France, Italy and Japan for over a period of seven years. Dancing is her passion and she still partakes in various types of professional Entertainment with a local agency called 'Performers' and also in amateur dramatics with the Jersey Green Room Club, JADC and St Martins Musical Society. When returning back to Jersey Katrina got a full time job at Lido Fitness Centre, enjoyed the buzz of classes and decided to get her qualifications through Shape in 'Exercise to Music' and started teaching fitness classes at several locations within the island and has now been doing this for over 20 years! She also qualified as a Zumba instructor two and a half years ago. Katrina feels her wonderful husband, Dave, and two beautiful children, Jake and Tawny, have supported her throughout her teaching which has meant a lot to her. She is very excited to be part of Momentum Dance as she loves teaching, it gives her the opportunity to motivate and encourage people to challenge themselves whilst having fun! 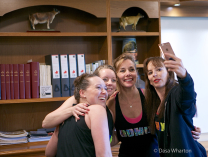